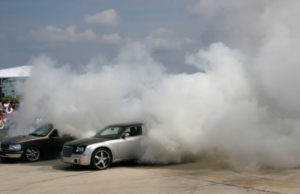 Remarkably the issue of sensory disturbance to wildlife is not addressed in the proponents environmental studies and the proponent admits each car can have the noise level of a chainsaw at 1 meter – 105dBA (Blog Trompazo post 2013) on the lower track in the river valley! Prairie falcons and golden eagles are extremely sensitive to human disturbance … what about song birds and every other living thing. Dr. Geoff Holroyd says “Lost habitat = Lost population”.

The Rosebud community does not buy into the promise that the track will be quiet. With up to 100 high powered cars on the track at one time, Rosebud knows they will hear the whine of a racetrack in what is now a peaceful hamlet nestled in the quiet countryside. The developer’s environmental noise impact assessment by Acoustical Consultants Inc. used input provided by the developer for noise modeling parameters and included the caveat that “ACI does not take responsibility for the accuracy of the information.” Calculations and computer modeling performed by another acoustician put the noise level at the nearest residence not at 37.7 dBA, as presented by the developer, but at just over 70 dBA! This would be perceived by a listener as eight times louder than the developer’s study stated.

See Paul Lassen’s letter for more detail on this issue.