RECENT NEWS!! On April 7, 2022 the Government of Canada posted the Final Recovery Strategy for the Bank Swallow on the species at risk public registry.

Critical Habitat for the Bank Swallow 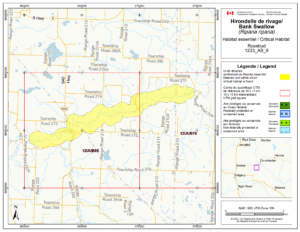 stretches from Redland to Beynon. Farmers owning land in the river valley look forward to maintaining the habitat on their private land to support and increase the bank swallow population.

From a Summary of the Proposed Bank Swallow Recovery Strategy 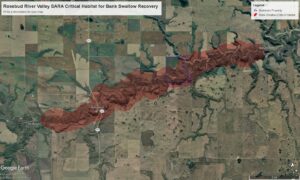 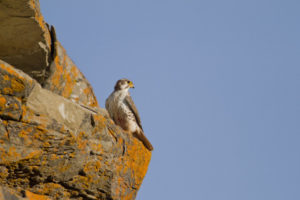 Third party environmental assessments, limited by the developer’s refusal to allow access to the site, were conducted by Dr. Geoff Holroyd, emeritus research scientist for the Canadian Wildlife Service (CWS), and by Linda Kershaw, MSc – Botanist and Author. Holroyd stated that the Biophysical Impact Assessment (BIA) commissioned by the developer is incomplete. The area contains 20 bird species listed as “sensitive” by the Alberta government, four of which are nationally threatened and three of Special Concern. Holroyd concluded that the proposed development will result in destruction of this ecological diverse and important area, and destruction of critical foraging habitat for listed species. In summary, this development is in the wrong place and cannot be mitigated. Lost habitat = lost population.

Kershaw found that there were major oversights in the developer’s BIA, observing 140 plant species, only 50 of which were recorded in the BIA. This included one rare species: prairie cordgrass. She states “I suspect the wetland is much larger than the area outlined on the map.” If the wetlands are in indeed larger, the racetrack will further fragment them as it winds through.

In reference to the developer’s BIA, Kneehill’s own environmental consultant, Summit Environmental, states in their third party review of the BIA (ASP 2012), that “The report does not mention any mitigation for the operation phase of the development. It is unlikely that a functioning motorsports park and associated facilities will foster the habitat requirements for those species that are mentioned as requiring protection during the construction phase.”

A report on biodiversity considerations was also completed by Cliff Wallis, P. Biol. of Cottonwood Consultants showing the negative impact of this development. Two example are the impact on the Prairie Falcons and the Bank Swallows as shown below (with 1,000 meter Alberta Environment setbacks for the prairie falcon).

Falcons will almost certainly no longer occupy two nesting sites. The bank swallows will have their foraging habitat over the wetlands put at risk by alteration of the wetlands for storm water and will be wiped out by vehicle collision. They were listed under the Federal SARA in 2017 as threatened. This location is critical habitat in the draft recovery strategy and a 500 meter radius from the bank swallow colonies is under discussion as of May, 2021. Just outside the 1,000 meter setback is a pair of golden eagles. 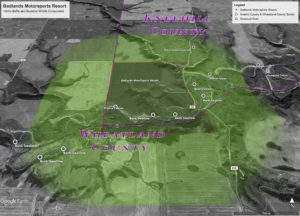